So let’s talk about something that I’ve had on my mind lately. I’ve recently been working on an affiliate site that is trying to build an email list.

The website was not getting very many subscribers especially for the amount of traffic that they were receiving. The site had a nice page with a contact form plugin and that was how they were capturing email subscribers. This particular site also has an offer for free videos if you subscribe to their email list.

On paper they should’ve been raking in subscribers but they weren’t. What I suggested is that they try a popup plugin. Now a few years ago I never would have imagined that those words would come out of my mouth. I absolutely loathed popups. You probably remember the ones that I’m talking about. The kind of popup ads that would just popup and popup. No matter how fast you clicked sometimes you could get 20 to 30 ads on your computer screen until you had to shut off your computer. Man I hated those things.

Well the Internet has changed a lot in the last decade or so and believe it or not, thanks to plugins for WordPress, popups are making a comeback.

Now hear me out before you guys break out the pitchforks. These popups don’t behave anything like the ones that you remember from years gone by. Developers now have a lot more tools at their disposal in order to make your popup experience a lot more user-friendly.

Gone are the days of the super annoying popups that would just ruin a webpage. There are now many WordPress plugins that offer almost unlimited variations and user experiences for popups. The current trend is seeing more and more website admin’s that are using these popups to collect email addresses from subscribers.

Let me talk a little bit about proper popup plugin usage. The first thing to remember is that you don’t need a popup on every single page. In fact that would be defeating the purpose. You want to make sure that your users only have to close the pop up one time.

You’re not trying to drive away viewers you are trying to get them to subscribe. Take a look at this popup from the affiliate site that I was talking about earlier. 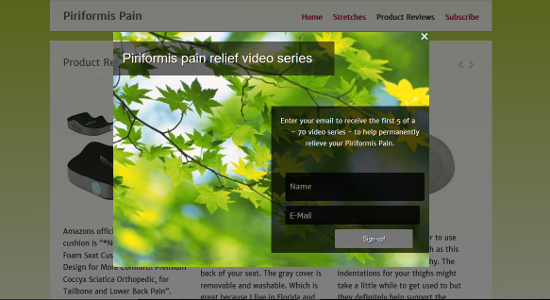 As you can see it takes up a good portion of the page and it’s impossible to ignore. Having said that it is also easy to close without signing up. This is important. You want to make sure that your viewers only have to close it one time and then never see it again.

A friend of mine owns a local Italian restaurant PaisanosPNP.com I made his website for him and did not include a popup plugin with the site.

Eventually though I convinced him that he could easily start an email list if he just added a pop a plug-in. Take a look at the pop up that he added.

I installed the plugin just in case there were any problems but he designed it and keeps it updated with new coupons. He’ll usually give a five dollar coupon if you sign up for his email list. Needless to say his email list is growing rapidly because people love pizza!

Where to find a Popup Plugin

The two screenshots of the pop ups that I showed you above or actually made by the same popup plugin. It is called the “PopUp by Supsystic” plugin. You can easily find it by searching in the plugin area of your admin or by going to the PopUp by Supsystic page.

I am not affiliated with Supsystic in any way but I found that this is a really good plugin and recently have begun using the pro version. They also offer a free version so that you can give it a try. Be aware though that the free version does not work with mobile devices.

Well that about wraps up this post I hope that you will consider using a popup plugin. As I stated earlier it’s a great way to start making an email list. Feel free to comment below and tell me how much you hate popups too. I would love to hear some feedback about them. Thanks: StPeteDesign.com